Life Chats: The End Of An Era 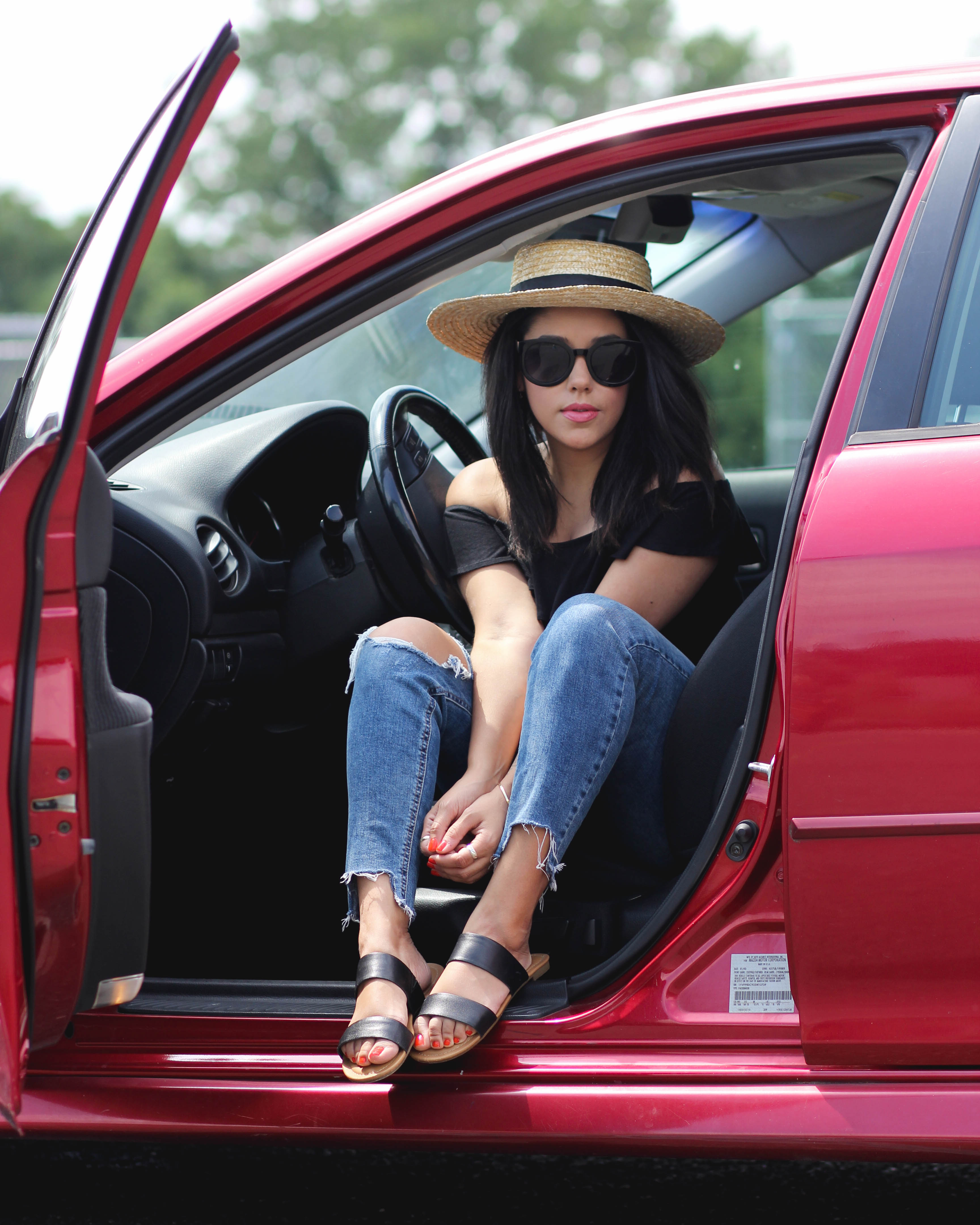 It’s literally the end of an era. After driving around in the same car for 14 years, (a little less than half my life) it’s time to say goodbye to my ’03 Mazda 6. To some people their car is just a car, but mine has so much sentimental value that I’m having a difficult time letting it go. It’s a piece of my dad, holding so many memories, that I never wanted to get rid of. Let me tell you the full story.

My first car was a ’92 Honda Civic. It used to be my cousin’s and even though it was old and used, I loved driving it around in high school. When I got to college though, I had my heart set on saving up for a new car. I was never the type to ask my parents for much. The older I got, the more I wanted to be able to do things on my own. My freshman year of college, my father told me that he wanted to make a deal with me. He said that if I could get a 4.0 my first year at Felician that he would buy me a new car. I didn’t know if he was being serious or if he was just trying to light the fire under my ass, but either way I told him that I accepted his challenge. I worked really hard and studied so much. I scored straight A’s in every course and happily showed him my grades. I remember this moment distinctly. I said, “I bet you didn’t expect me to get a 4.0!” He laughed and said, “I always knew that you could do it. I never had one doubt. You’re smarter than you think. You’re smarter than me. I just wanted to give you an extra push.” He was so proud of me. I will never ever forget that moment or his words. His voice echoes on repeat in my mind.

My dad was really big on education and doing well in school. He had a bachelors degree, two masters and almost went for his doctorate degree too. He was a teacher for years then the assistant principle and then the principle. His drive and motivation to climb the ladder of success was so inspiring and I knew that he wanted the same for me. Laziness and slacking off was never an option for him. He constantly pushed me to be the best version of myself and knew how to motivate me. In high school, I got too caught up with boys and hanging out with the popular (and the wrong) crowds. I didn’t always make the best decisions and my school work was not always top priority. He expected more from me because he knew I was capable. He knew I was better than that and he was right. Without fail, he believed in me even when I didn’t believe in myself. Even if he never bought me the car, the fact that I got a 4.0 proved that I had it in me all along. I love that he helped me see that, and to me that is what this car represents. 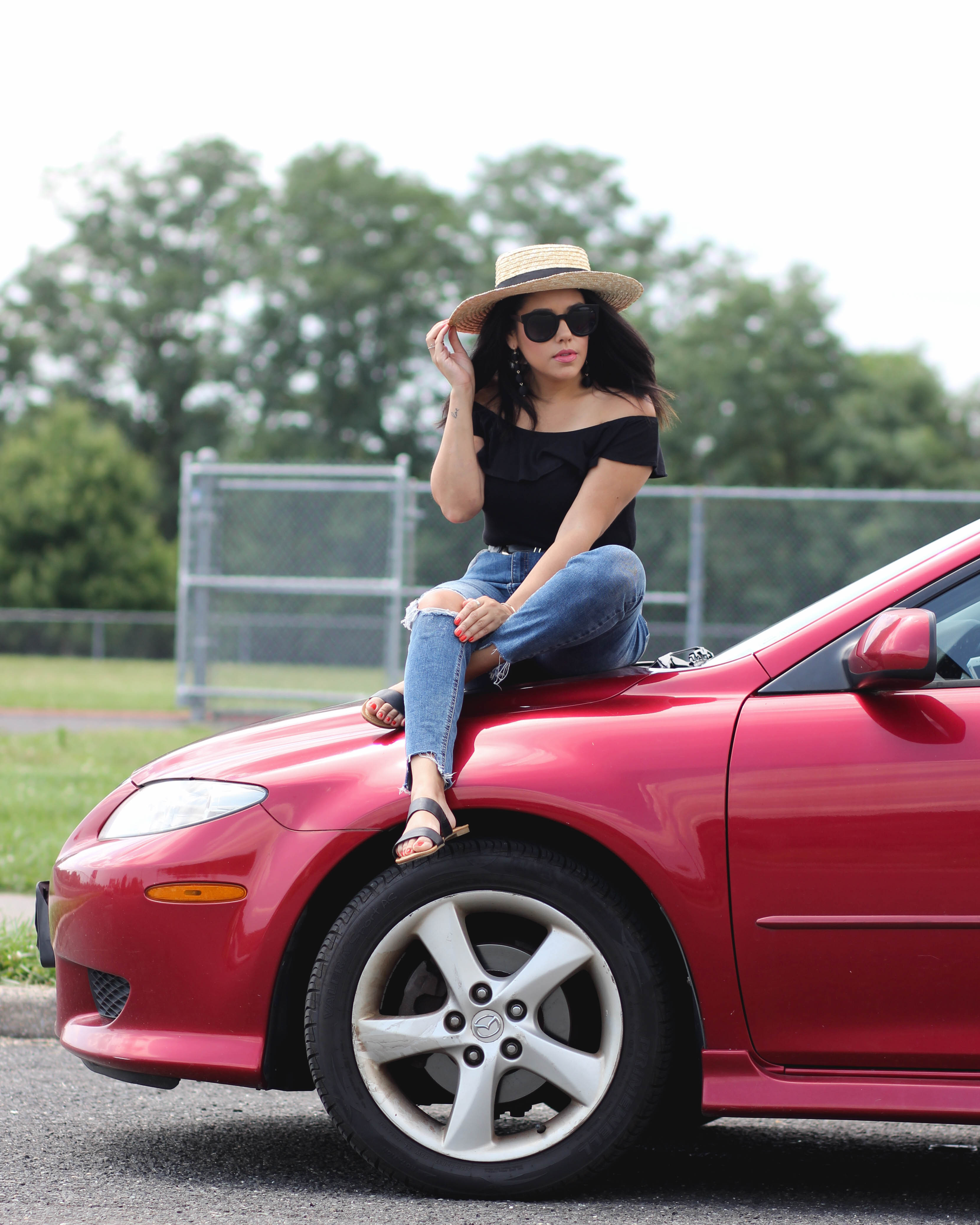 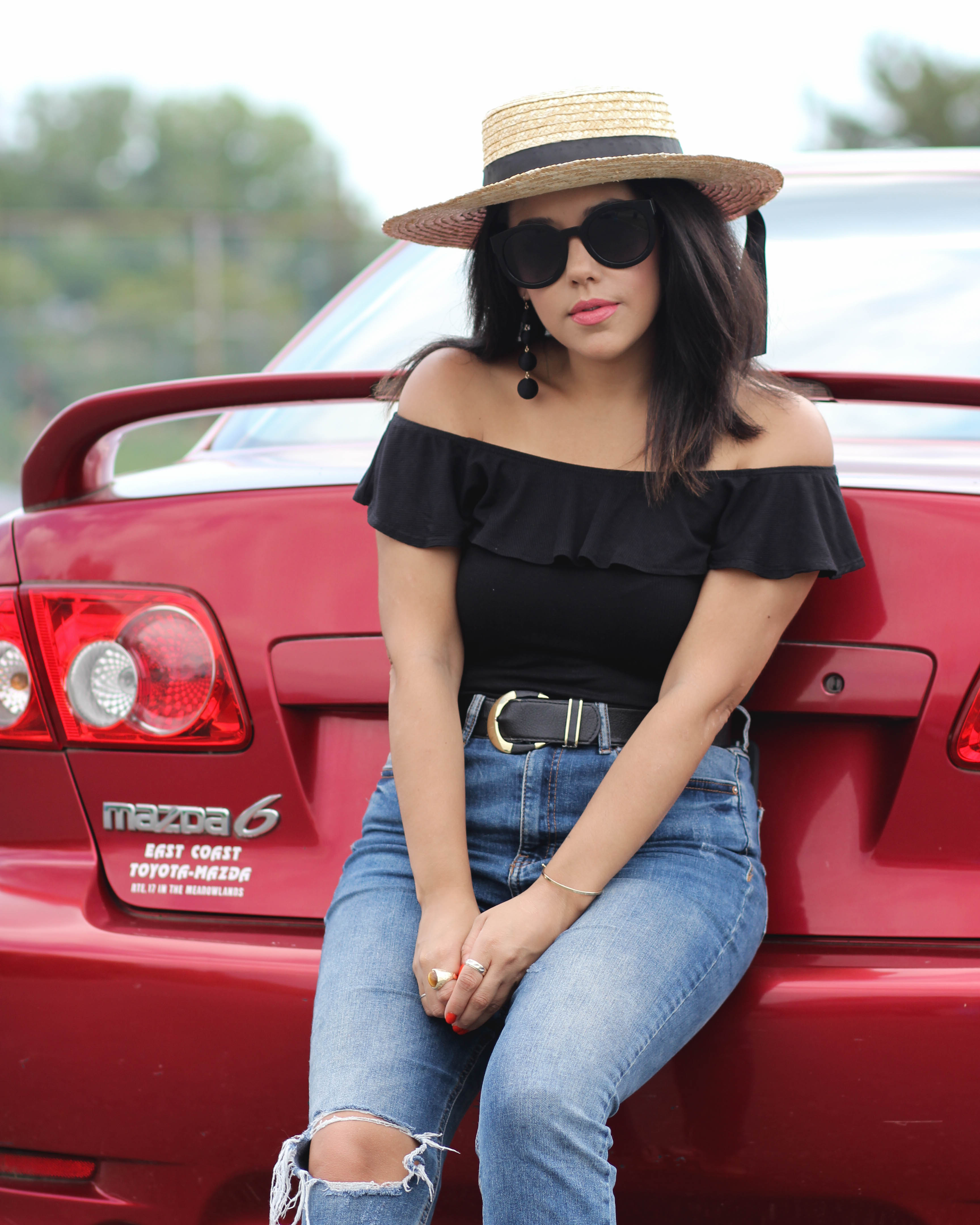 I clearly remember the day we went to the Mazda dealership. I immediately fell in love with this little red car that I quickly nicknamed, The Six. We test drove it together. I watched him ask dozens of questions and talk them down on the price. I was extra grateful for him in that moment. I had to promise him that I would stay on top of my car, which meant taking it for oil changes, car washes, no speeding, obeying all traffic laws, keeping it clean and overall just treating it well. He ALWAYS knew when I wasn’t holding up my end of the bargain and I could sense the disappointment in his voice. I remember every argument we ever had about this car. I never wanted to disappoint him, but sometimes I fell short.

This car got me all through college. It got me through my first real job after graduation. It took me on mini getaways and back and forth to NYC more times than I can ever count. I’ll never forget when it died on me in the middle of the West Side Highway. But, the most memorable times in this car were the ones with my dad when I got to drive him around. It’s so crazy how our parents take care of us our whole lives, no matter how old we are, but then one day we have to be the ones to take care of them. When my father got sick, I had to drive him to the hospital countless times for chemo. I took him to get his head shaved when his hair started to fall out. When he died, I had to drive myself back home in this car and I remember looking over at the passenger seat just wishing that he was still there next to me. I had a small black rosary bead wrapped around his arm when he passed, so I took that and hung it in my review mirror. I also created a little shrine for him where I stored photos, his glasses, his license and even his pens from school into a small compartment. It may sound silly, but I felt that it kept me safe. I’ve had many close calls and have always believed in my heart that even though I couldn’t see him, he was still sitting next to me in that passenger seat. He was still trying to protect me.

He drilled things into my head by saying them repeatedly. I used to get annoyed like, “Ok dad, I know! Stop reminding me.” Let me tell you that one of the things I miss the MOST about him is that I no longer get those reminders or those “annoying messages” telling me what I need to do. Sometimes we take those little things for granted and once they’re gone we can’t ever get them back. For these last 7 years, I have longed to listen to a voicemail from him telling me that I needed to get an oil change. I’ve wanted to park my car in his driveway and have him inspect it to make sure there was no damage. I’ve actually missed him telling me how to drive and changing the radio station to make me listen to country music with him. When I got my first flat tire or when my battery died, the first person that I wanted to call was him, but I couldn’t. He was always saving me, but all of this taught me that I need to be able to save myself. This car taught me a lot of responsibility. It symbolizes him in so many ways so to me, it’s not just a car, it’s another little piece of him. 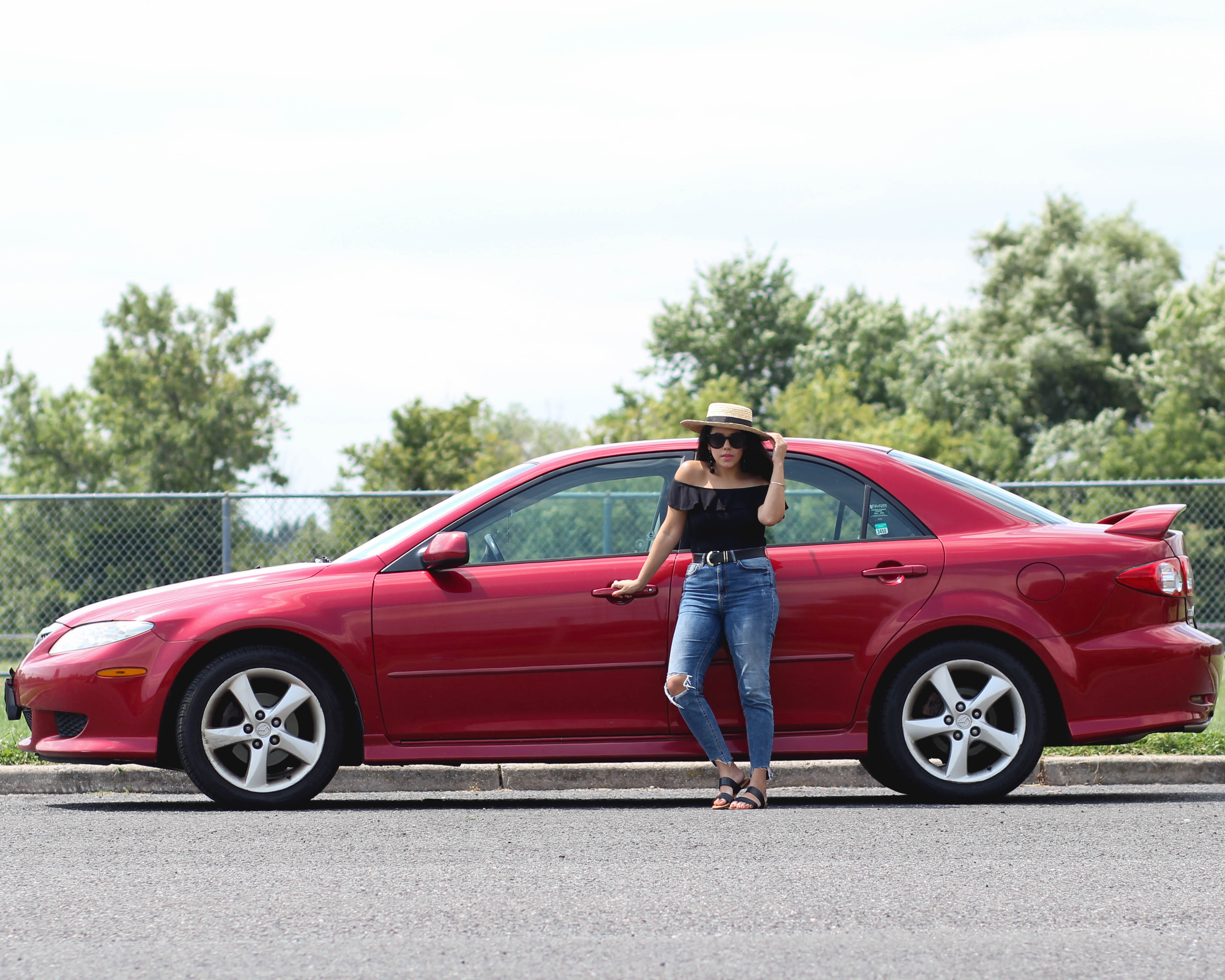 Two days before I left for Miami, my car was starting to act up. I immediately called my mechanic and he said that most likely it was the transmission. I left it there while I was away and the moment I got back I found out that it was indeed the transmission. Since my car is already 14 years old with tons of mileage, he said the best thing for me to do is to invest that money into another car and it makes total sense. Other things are starting to go wrong as well and it’s better to take that money and get a newer and safer car. I knew that this day would eventually come, I just didn’t expect it to be today. The timing is not the best for me financially, but life is not meant to be convenient. Things are going to happen and we don’t have any control over the timing. I’m working harder on my patience and trusting in the reasons, even if I don’t always know the answers. God keeps reminding me that I need a little more calmness in my heart. I’m honestly just so thankful and so appreciative that it even lasted this long. This car has seriously been through hell and back, but doesn’t she still look pretty?!

I felt inspired to do a shoot and to write this post as a special tribute and thank you to my dad. Whenever I do things like this it becomes so therapeutic for me. You’d think that by now opening up about all of this would get easier, but trust me, it’s still so difficult to be so vulnerable. His anniversary is coming up next month and with this happening now I think I’m just overly emotional about it all. I’ve become so attached to it and all of its memories. I never wanted to get rid of anything that my father has given me. No matter how much I have of his it is still never enough. The sentimental value runs deep and I can’t lie, it’s been a rough week on me emotionally just thinking back on all of this. He’s probably smiling down on me right now though just knowing that I was able to make this car last for so many years. I hope he’s proud!

Thank you dad, not just for getting me this car, but for everything that it symbolizes.  Thank you for always believing in me, for always saving me and for always pushing me towards greatness. Your unconditional love is still so present in my life and it continues to guide me towards the best version of myself. It may be the end of an era, but it’s also a new beginning and I know that you’ll be here with me for the ride. I love you. ❤️