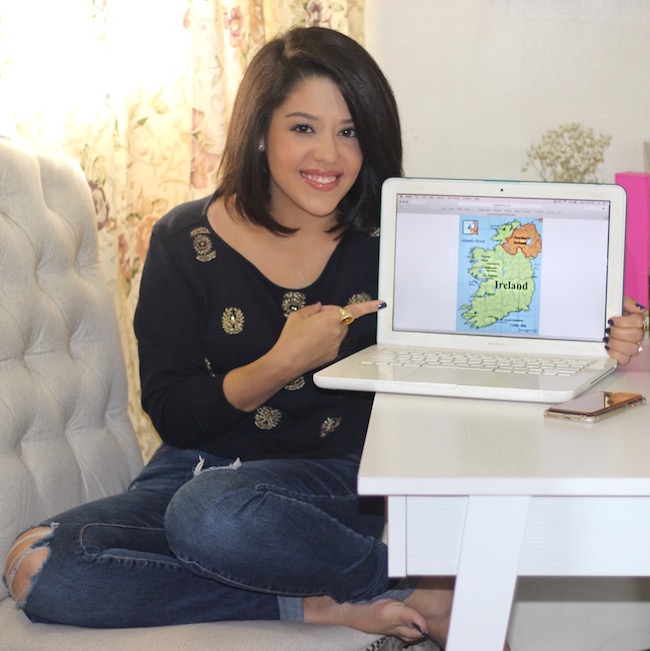 I decided to switch things up and start the week off with a new Life Chats post because today is my father’s birthday and this is my gift to him.  If you follow me on instagram, then you saw that I made an announcement last week that I am going to Ireland.  Today however, I am going into much more detail about why, how and what inspired me to finally do it.  As always this is extremely personal and this will be a long one, so if you make it till the end I truly appreciate it.  Thank you. <3

When my father first got sick, we only had three months from his diagnosis till the day that he passed.  It all happened so quickly and I feel like there was so much more that we should’ve discussed during that time and didn’t.  We were all living in this space of not knowing how much time had left but also believing that he would come out of it ok.  It’s hard to explain, but I didn’t want to ever discuss the possibility of him dying.  I just couldn’t.  So instead, I tried to talk about the things that he still wanted to do so that we could try and make those things happen while we could.  He surprised me by saying that one of his dreams was to go to Ireland, sit in an authentic Irish pub and drink a Guinness.  He wanted to explore it. He was fascinated by it.  My dad was not one to take airplanes.  I remember one time he had a business trip to Nevada and he was freaking out.  He was the type to drive everywhere from Florida to Virginia to Nebraska, you name it.  The fact that he had this dream of traveling to another country really struck a chord with me.   He said that if he got out of this ok, that he wanted to finally book a trip there and I said that I would go with him.  I promised him that if he did not make it through, that one day I would fulfill that dream for him and go in his place.  You see one of the things that I have carried with me over these last five years is that I did not do enough things with him when I could have.  We went on trips when I was younger and in my teens, but as I got older he wanted me to take more trips with him and I never made the time because I was in college and caught up with all the things life brought me at that time: friends, love, going out, etc. My priorities were not in check.  I remember one time he took the drive all the way to Virginia by himself because he wanted to go so badly to one of his favorite places, Bush Gardens.  I should have gone with him.  Why didn’t I go with him?  Things like that haunt me till this very day.  I just have these visions of him being by himself and it makes me so sad.

Over these past five years, I’ve continuously thought about my promise of going to Ireland.  I never knew when I would be able to make it happen, however I did set a personal goal of doing it for his five year anniversary.  Once his anniversary passed and I obviously didn’t go, I started to wonder if I would ever do it.  I’ve mentioned so many times how much I love to travel and how much it means to me and that’s mostly because when I do it, it helps to fill this void inside of me that I’ve had all these years.  I’ve mentioned wanting to go to LA many times and for so long I thought that is what I wanted.  I thought that is what I needed.  When I tried to book it this year and it never worked out I started to wonder if it was for a reason.  The more and more I have thought about it over these past few months, the more I started to realize that maybe it’s not really what I want.  My birthday is coming up in November and I started looking back on this past year.  What big risks did I take?  What did I do that was significant?  What did I do that was life changing?  I couldn’t pinpoint anything and that left me with an unsettling feeling.

So this brings me to almost two weeks ago.  One of my best friends went to South Africa for the first time by herself for three weeks.  She stayed in an orphanage part of the time to be with kids whose parents are HIV positive.  The rest of the time she bungee jumped off a cliff, went shark diving, walked with lions, rode elephants… I mean she literally did so many things, so many scary and inspiring things, and she did them on her own.  She took risks and a huge leap of faith. Words can’t even begin to describe what I felt the first few days of her trip as I looked at all of her photos.  I kid you not it just sparked something deep within me.  I was fascinated and I was inspired and I just could not shake that feeling.  I kept thinking about it and all of a sudden it just clicked.  I need to go to Ireland.  I have to go to Ireland.  And I am going to do it by myself.  Her trip just filled me with empowerment that if she was able to travel on her own and experience all of what she did then I could most certainly do the same.

Once I got that idea in my head I could not think of anything else.  This was a few days before fashion week and to be honest I just did not give a crap about fashion week.  All I could think about was Ireland and how to finally make it happen.  I spent a couple of days doing research online of what to expect when traveling alone and came across all of these amazing travel blogs by women who travel the world solo.  That inspiration just kept on coming.  Then I specifically searched for solo trips to Ireland and literally everything that I found said how it’s the best place to travel to on your own for the first time.  It’s safe, the people are extremely friendly and of course there is no language barrier so it’s easier to navigate and understand.  I put up a status on my personal Facebook account asking if anyone had been to Dublin and I got tons of messages from friends just confirming the fact that I could definitely do this.  I probably asked a ton of questions to different people to get as much information about it as I could.  Later on that same night I looked up flights.  I picked random dates in November that worked for me.  After having discussions with friends I learned that it would be best to fly into Shannon, take a bus to Galway and stay there half the time then take a bus to Dublin for the remainder of my stay.

So there it was right in front of me.  My flight.  I must have typed my information in and deleted it at least three times.  I admit that I was nervous and still am.  I have flown plenty of places by myself, but I have never actually traveled completely alone in another country for 10 days.  I was honestly shaking a little.  Before I booked the flight, I asked my father to give me a sign.  I know to some that might sound stupid, but I do this often.  Talking to my dad helps me.  So I asked him to just give me a sign that I could do this and that I could do it on my own.  Later on that night I went into the bathroom and on the wall by the light switch was a ladybug.  I can’t even remember the last time there was a ladybug in my house.  The fact that it’s supposed to represent good luck and it popped up right after asking my father for a sign was really all the proof that I needed.  I couldn’t stop smiling.  I booked the flight.

Life truly begins outside of our comfort zone.  I think that this is going to be such an eye opening experience for me.  If I can do this, then I can do anything.  I know that my father is going to be with me there in spirit and I am bringing a piece of him with me on this trip.  I have been wearing his tiger’s eye ring from the 70s ever since my mom found it and I will be wearing it the whole time I am there.  I want to do all of the things that I know he would have enjoyed.  I am going to explore, book tours and of course, drink a Guinness or two in his honor at a real Irish pub.  I’m even going to take a tour of the Guinness Factory and do a pub-crawl.  I am going to put myself out there to meet tons of new people.  I am not going to be afraid of anything.   This trip is a birthday present to both my father and to myself.  Booking it and knowing that I am actually going to do this is like a natural high.  I can’t even describe it.  I am fulfilling a promise that I made to my father five years ago.  I feel at peace within myself.

Happy Birthday to you, my Angel.  You have changed my life in more ways than you know.  I can’t wait to make your dream come true.  I know that you will be right there next to me the whole time holding my hand.  I love you. <3